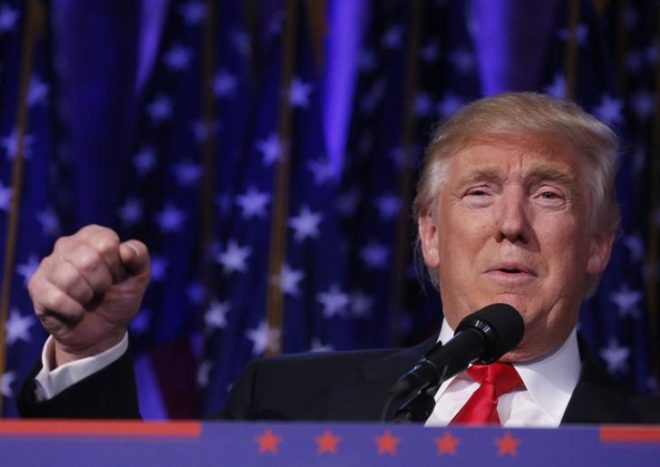 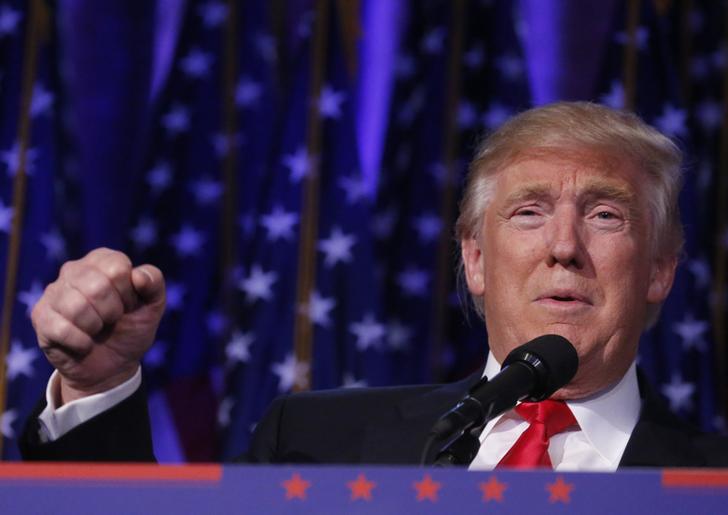 It is a month today since Republican Donald John Trump — a billionaire businessman, TV personality, aspiring wall builder, misogynist, racist, Islamophobe, climate-change denier, pussy grabber, and rookie politician — wrested the presidency of the United States in the most statistics-defying American election, in my memory at least. His unlikely and spectacular victory over his Democratic Party rival and overwhelming favourite Hillary Rodham Clinton sent shockwaves not just across the country, including his own party, but across the world where the US president’s mental … well … thoughts, inclinations, and tendencies are keenly observed.

When Trump announced his candidacy for the presidency in July 2015 after much speculation, he provided much amusement to many. (Some Twitter reactions here)

Not just rival Democratic politicians, but politicians from his own party who were supposed to back him — Marc Rubio, Ted Cruz, Chris Christie, Mitt Romney …

That’s when the camps were divided for the final battle. And, that’s when Hillary Clinton along with her Democrat supporters, her financial, media, academic, ideological, and foreign backers started on their unusual campaign to ensure Donald Trump wins the presidency.

Barack Obama, who ran a vicious campaign in the primaries against Hillary in the run-up to the 2008 presidential election, too joined the fun.

Yes, you read that right. They all worked together (even if many of them unwittingly), often in tandem, to ensure Hillary lost and Trump won the White House. Not only this, I have no doubt whatsoever that many of the so-called Hillary supporters, like Obama, knew that she was going to lose the race because of the line of campaign she had chosen. He added fuel to the fire that was rapidly burning down Hillary’s prospects.

The US presidential election of 2016 was supposed to be a “change election” after eight years of a Democratic government in place. The candidates had to weigh in not just the anti-incumbency factor of the party, but the expectations, frustrations, and even despair of the people who were going to vote. Therefore, it was doubly difficult for a Democratic Party candidate win the election this time. The key for the Hillary campaign to win the race was to understand this important factor and make a strategy based on it.

Most of the world thinks, rather believes that the left-liberal of the political and ideological spectrum, like the Hillary supporters, is cleverer than the right. In fact, many believe they are on a different plane altogether. After all, they are the smug ones who crowd the academia, the lecture halls of universities, press clubs, etc, and engage in “intellectual” debates and discussions over tea, coffee, whiskey, ganja, etc. I mean, how often do you come across right-wingers who would light a cigarette with a cheap made-in-China lighter, exhale the smoke, look at the sky and lament, “Air pollution is a terrible thing, it’s fucking killing us more than anything else?”

These left-liberals took upon Trump and his supporters in such a way that it was almost impossible to comprehend that this was the most important election in America.

While some wise men and women were writing open letters warning the voters of the dangers of a Trump presidency, the not-so-wise were violently attacking Trump supporters.

They started labelling all those who supported Trump as bigots, racists, sexists, and what not. They didn’t stop at that, they in fact went on to do things like unfriend them on Facebook and shame them for supporting a political candidate in a democracy that they are so proud of.

While no one can deny that many of Trump supporters were indeed bigots, racists, sexists, etc, a lot many of them weren’t so. But who would reason this with the righteous Hillary supporters? They had already blinded themselves with anti-Trump hatred.

They even went a step further. To insult Trump, rather more his supporters, they even propped up naked Trump statues all over the country. 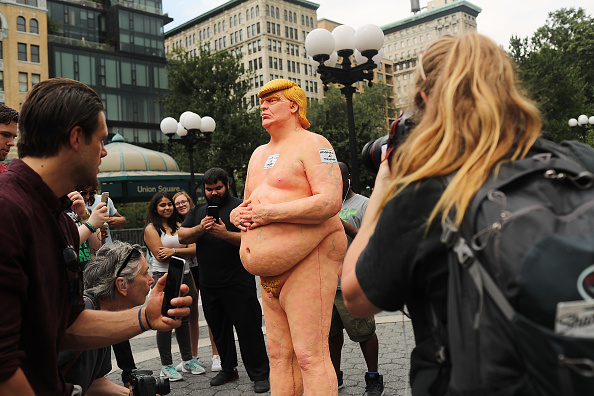 And Hillary? What was she doing all the while?

Instead of asking her supporters to go slow against Trump supporters, she chose to paint all of them as a bunch of “deplorables”! Yes, how can supporters of someone like Trump be anything but a bunch of deplorable people?

Or rather, “How can you support someone else other than me and not be deplorable?”

This attitude of Hillary and the behaviour of her supporters made Trump supporters lie low and stop talking about him in public. People who have been following the election and commenting upon it have said the same.

By this time, discussions and debates among American voters, more importantly between Hillary and Trump supporters on issues, the candidates’ stands, policies etc — if at all there were any to begin with — completely evaporated. It was mainly Trump who was hammering home issues of national interest during his speech such as homeland security, jobs, Obamacare, etc. He was giving the American public an alternative option. The undecided voters were listening and absorbing everything Trump had to say.

But Trump also had another strategy. He was also playing Hillary and her supporters like a fiddle while pumping up his supporters. He stepped up his attacks on his adversary by casting aspersions on her health, her anti-women character, painting her as a scamster, and even threatening to put her in prison.

Here, I must say I have a feeling that Trump got the clue when he first saw the signs of left-liberal myopia earlier in the campaign when he suggested Hillary might be killed by a Second Amendment fanatic.

This made the left-liberals go even madder. All they could sign was that Trump was attacking a woman, a woman who had served the country as the secretary of state, a senator, blah, blah …

And, the Hillary campaign toed a similar line. All they could project was Hillary’s gender that presented a chance for her voters to be a part of history as she would be the first woman president of the US, and that Hillary was a DC insider who had years of experience in the government. They failed to bring anything fresh on the table.

There were also serious allegations against the Hillary campaign of planting their men in Trump rallies to disrupt them using violence.

And, this was how the change election they were dealing with.

Meanwhile, the American mainstream media went overboard in their support for Hillary. That impartiality is a virtue in journalism was completely lost upon even among most those few who didn’t work as presstitutes. They probably got influenced by the presstitutes of big media houses who were not only shamelessly praising Hillary while assailing Trump and presenting lopsided and loaded stories, but putting out concocted projections, polls, public opinion, etc.

Endorsing political candidates had been an old practice of American media, but this was simply not endorsement. Those who have followed the US mainstream media during the campaign couldn’t have missed their agenda to see Hillary Clinton as the president — by hook or by crook.

It is very hard to believe that they were not paid for by proxy to do so.

It never occurred to those too-clever-by-half presstitutes that what they were dishing out in the name of reporting would be scrutinized and widely discussed in this age of social media. This support for Hillary became so ridiculous towards the end that even New York Times gave her an 85% chance of winning against Trump’s 15% and stood by it even when voting got under way on November 8. 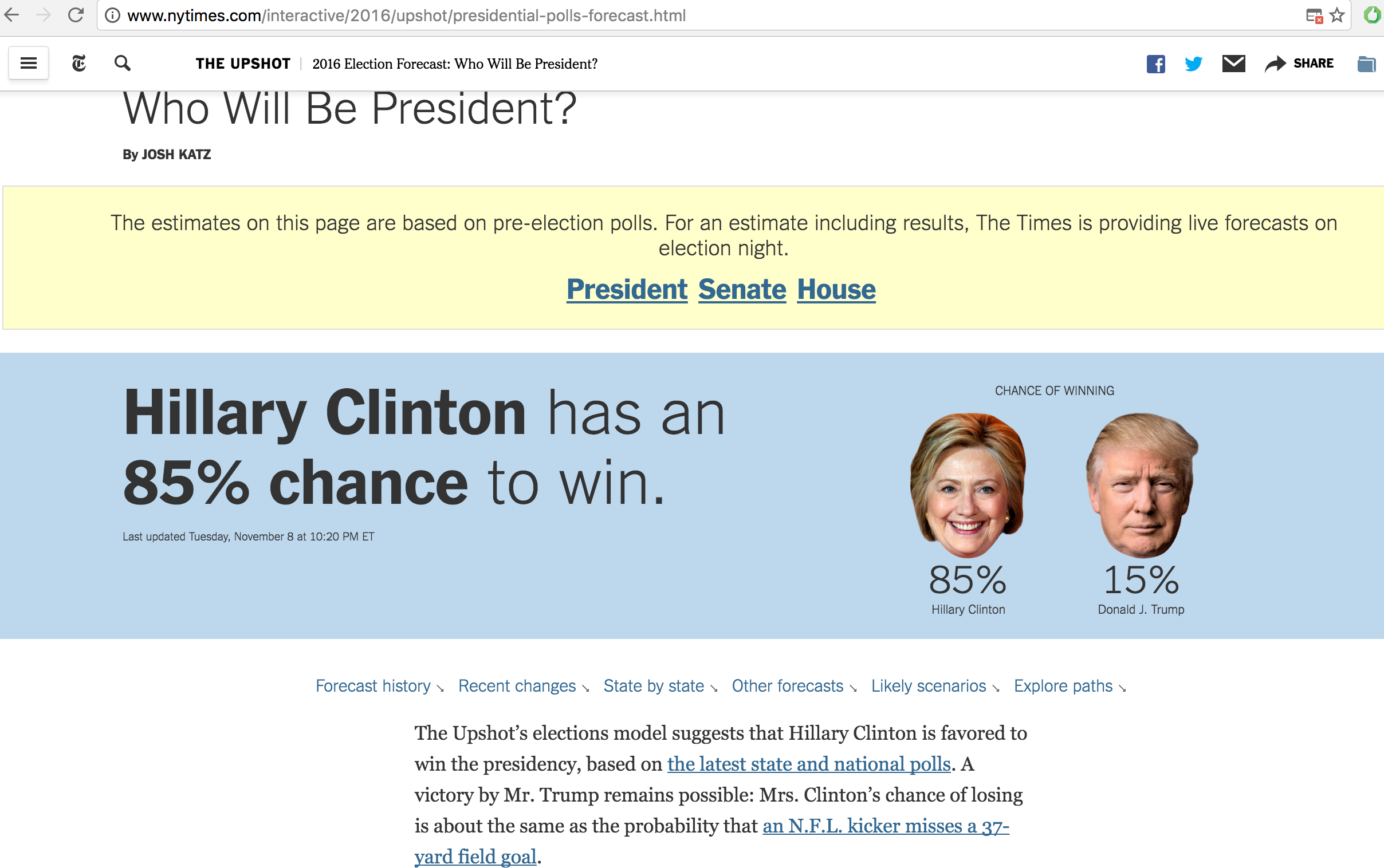 New York Post columnist and Fox News contributor Michael Goodwin, in one of his articles in September, feared that the media’s bias in favour of Hillary could cost her the election.

As the election campaign entered the final days, the Hillary camp — backed by rowdies, the media, opinion makers and perception moulders — left no stone unturned to portray Trump as an evil man. They painted him as a sexual predator and even paraded women who suddenly realized after years that they were sexually attacked by Trump. And if this was not bad enough, a 10-year-old tape emerged just in the nick of time that purportedly showed Trump bragging about how easy it was for a celebrity like him to “grab a woman’s pussy”.

The emergence of the video triggered an exodus of Republican heavyweights from the Trump camp and withdrew their endorsement from their own candidate days before the country went to vote!

All these were an assault on the intelligence of the voters, at least Hillary’s deplorables thought so. Those who were undecided until then too decided to vote for Trump.

And, they were the “silent majority” that Trump supporter and online radio broadcaster Bill Mitchel often talked about. He predicted, long before the first ballot was cast, that it would be the silent majority who would carry the Republican candidate through.

I am 100% certain trump will win because at the end of the day, this election is not about Trump or Hillary.

And, the liberal media didn’t spare him too.

After the results were out, Hillary blamed her loss on the FBI reopening the case of the scandal involving her personal email server and giving her a clean chit within days, which she said broke the momentum that was in her favour.

Could be, but insignificantly. It must have swayed a few voters here and there, but that’s all. By then, the voters had already made their mind up.

The left-liberals of the world is yet to wake up to the fact that the planet is witnessing a phenomenon where political correctness, liberal and socialist values are rapidly losing currency. It is not that these things have ceased to become articles of virtue overnight, but the proponents of these virtues have become bullies and extremists themselves as we saw in this year’s run-up to the US election.

Shaming people who have a different opinion and stand, painting them all and sundry with a big brush by calling them bigots, communalists, racists, sexists, etc, and making fun of them are never going to help the liberal cause.

Trump happened, before him Brexit happened, and Europe is waiting to happen. And, before all these, Narendra Modi happened.

And, it doesn’t look like the liberals are going to come to terms with with this reality anytime soon. At least in America.