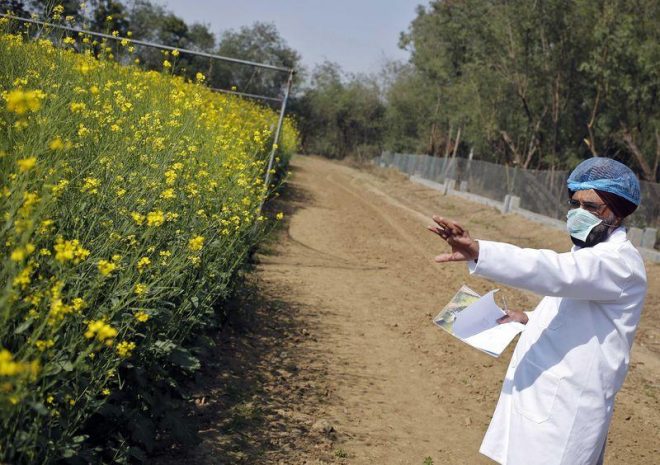 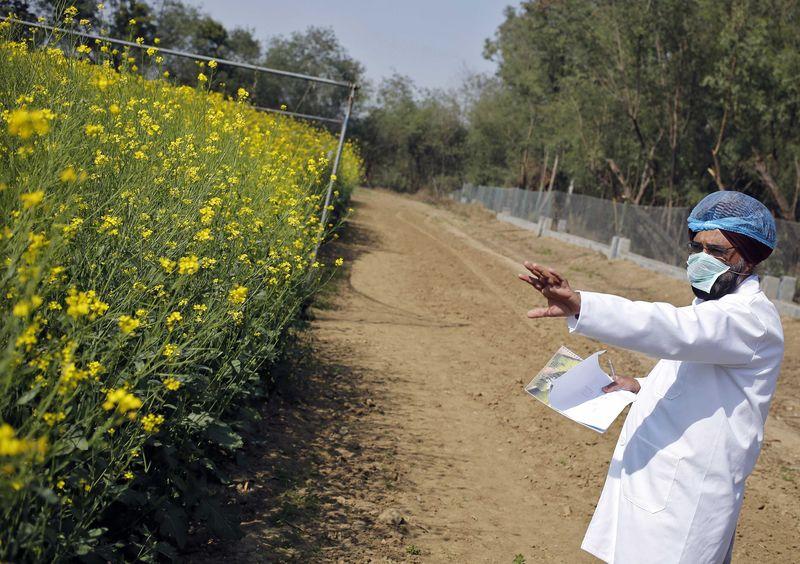 Last year when Narendra Modi led the BJP to a landslide victory in the Lok Sabha election, the country looked at him with great hope. After all, the decade of decay under the Congress-led UPA government had almost pushed the citizens of the country to the brink.

We saw the anger against corruption and misgovernance pouring out on the streets during Anna Hazare’s campaign in 2011.

One of the reasons I voted for Modi was his party’s pre-poll promise of not allowing genetically modified crops in India.

The BJP manifesto said GM food would not be allowed “without full scientific evaluation”, but the party seems to have forgotten the promise. GM food is about to be introduced even though most of the questions regarding GM crops and food remain unanswered.

I have raised concerns about allowing GM crops in India in my tweets.

Without repeating the concerns I have expressed time and again, I would just like to point out a few things that our beloved Prime Minister Narendra Modi may like to know if he doesn’t already.

How does it serve our nation and its farmers to depend upon one or more foreign companies for seeds — crop cycle after crop cycle, year after year? I hope the Prime Minister knows that our farmers often pawn their land as collateral for loans taken to buy seeds. Companies like Monsanto keep coming up with newer versions of seeds, and every time that happens, the cost of the seeds goes up. This makes the farmer fall into a vicious debt trap that he escapes only by killing himself.

The single-largest factor for farmer suicides in India by a long margin is crop failure followed by debt — debt that the farmer takes to buy seeds. When his crop fails, or gives less-than-expected yield, the farmer is doomed.

This is just one dark side of introducing GM crops in India.

There are other dark sides to GM crops. One of them is that GM crops require more water and more pesticides — pesticides made and patented by the same companies that make the GM seeds or their subsidiaries! And, not just during droughts, GM crops have failed when we have had good monsoon rains.

India allowed Monsanto to sell Bt cotton seeds about a decade ago after intense lobbying and arm-twisting by the western countries, evangelists and professional saboteurs in the UPA government. Soon, 95 per cent of the cotton farmers started using Monsanto’s Bt cotton seeds. According to National Crime Records Bureau data, nearly 300,000 farmers have committed suicide in India from 1995 to 2012. The top reasons driving farmers to kill themselves are as follows:

A closer look would reveal that reasons 1, 2 and 4 can be linked to GM seeds. Borewell failure too? Yes, GM crops need more water resulting in depletion of the groundwater reserves. That’s when the need to dig deeper arises, and that’s when the farmer takes loan to get new borewells dug. One in 100 farmer suicides is a result of this.

Let’s now look at other hazards of GM crops and produce than farmer woes.

There are several grey areas regarding the impact of GM food on health. Multinational companies like Monsanto are not forthcoming with honest answers. If Bt in GM food can kill pests, it can have health hazards for human beings too. The Institute of Responsible Technology lists 65 health risks connected to GM crops. It lists some alarming findings. No “scientific” study has negated these findings.

Among many other things, it found agricultural labourers who picked or loaded Bt cotton reported reactions to the skin, eyes and upper respiratory tract. Some labourers required hospitalization. Employees at a cotton gin factory take antihistamines every day.

Also, after the cotton harvest in parts of India, flocks of sheep grazed continuously on Bt cotton plants. Reports from four villages revealed that about 25 per cent of the sheep died within a week. Postmortem studies suggested a toxic reaction as the cause of those deaths.

Not only that, rats that were fed Bt potato suffered intestinal bleeding. Many of them died. The report says “similar damage to the human small intestine might result in incontinence or flu-like symptoms, and may be precancerous.”

Therefore, this study overturns the assumptions that Bt toxin is destroyed during digestion and is not biologically active in mammals.

GM crops are designed to kill insects. Not only do they kill the bad insects, but they also kill the good insects like bees, which are critical for life on this planet. They help in pollination which sustains the plant kingdom. If pollination stops, the plant kingdom will die, and in turn all animals on earth will perish.

Also, in an essay on Centre for Research on Globalization, Brit Amos argues:

Genetically modified seeds are produced and distributed by powerful biotech conglomerates. The latter manipulate government agricultural policy with a view to supporting their agenda of dominance in the agricultural industry. American conglomerates such as Monsanto, Pioneer Hybrid and others, have created seeds that reproduce only under certain conditions, often linked to the use of their own brands of fertilizer and/or insecticide.     The genetic modification of the plant leads to the concurrent genetic modification of the flower pollen. When the flower pollen becomes genetically modified or sterile, the bees will potentially go malnourished and die of illness due to the lack of nutrients and the interruption of the digestive capacity of what they feed on through the summer and over the winter hibernation process.

A small group of beekeepers in Mexico’s Yucatan celebrated when a judge overturned a permit issued to Monsanto by the Mexico government and an environmental protection agency, Semarnat, in June 2012, that allowed commercial planting of Roundup-ready GM soyabean.

Is our government even thinking along these lines? Who is giving Modi advice on the environmental damage GM crops may potentially cause?

Now, let’s discuss how Monsanto was allowed to enter India. You will know that GM seeds are more than just about crops and farming and the control of the agriculture sector by new-age imperialists.

Five things changed with Monsanto’s entry: First, Indian companies were locked into joint-ventures and licensing arrangements, and concentration over the seed sector increased. Second, seed which had been the farmers’ common resource became the “intellectual property” of Monsanto, for which it started collecting royalties, thus raising the costs of seed. Third, open pollinated cotton seeds were displaced by hybrids, including GMO hybrids. A renewable resource became a non-renewable, patented commodity. Fourth, cotton which had earlier been grown as a mixture with food crops now had to be grown as a monoculture, with higher vulnerability to pests, disease, drought and crop failure. Fifth, Monsanto started to subvert India’s regulatory processes and, in fact, started to use public resources to push its non-renewable hybrids and GMOs through so-called public-private partnerships.

New-age western imperialists are using GM seeds to control countries. After invading and occupying Iraq, the US-planted administrator of the country Paul Bremer issued 100 orders designed to rob the country completely and to keep it perpetually enslaved. Order 81 particularly deals with the country’s agriculture sector and farmers. It turns Iraq into a food consumer from food producer.

It deprives Iraqi farmers of their right to save and plant seeds, a right as old as 10,000 years. It puts the entire Iraqi agriculture sector in the hands of companies like Monsanto. Iraq is now a naked country without any food security.

We must not forget that India is an agriculture-dependent country. The success or failure of the monsoon determine our entire economy. Why give the control of such a critical sector in the hands of foreign countries?

India, if it has to depend on those companies for seeds, will find itself in a very precarious position if western sanctions are imposed on it for some reason. Then, it will be left with no seeds, and no crops to feed its population of 1.25 billion.

Can the Prime Minister guarantee that GM seeds are not a part of military tactics against countries by the US-led west?

Union environment minister Prakash Javadekar recently said there is no scientific evidence to show GM foods are harmful and countries all over the world consume GM produce.

Mr Javadekar, can you please name those countries where western biotech companies are the players in their farm sector? If you can name them, I can then show you that they are just vassal countries of the west.

People around the world, including India, are wary of GM crops and produce. A December 2013 article in Economist reports that in China, GM crops have taken a huge political hue alongside food safety concerns following cases like this.

Chinese anti-GM activists often describe their cause as patriotic, aimed not just at avoiding what they regard as the potential harm of tinkering with nature, but at resisting control of China’s food supply by America through American-owned biotech companies and their superior technology. Conspiracy theories about supposed American plots to use dodgy GM food to weaken China abound online.

Many European countries like France have not allowed US companies like Monsanto to enter their markets. Even in the US, the home of GM behemoths like Monsanto, there is a rapidly growing movement against GM organisms.

Modi is now pushing hard for a “second green revolution” through GM food. Punjab, the shining example of the original “green revolution”, is paying the price of going full throttle with GM food. The pesticides used for GM crops contaminated the groundwater resulting in the state taking up the No. 1 spot in per capita cancer cases in India. Where is the hard evidence reviewed by independent researchers to back GM food as harmless and nutritious food?

Our Narendra Modi-led government must know that it came to power riding on an upsurge of nationalist sentiments where Modi’s “India First” slogan became the catchword of the election campaign. It will pay Modi to remember that the nation will never forgive the leader who surrenders its sovereignty to neo-imperialists.