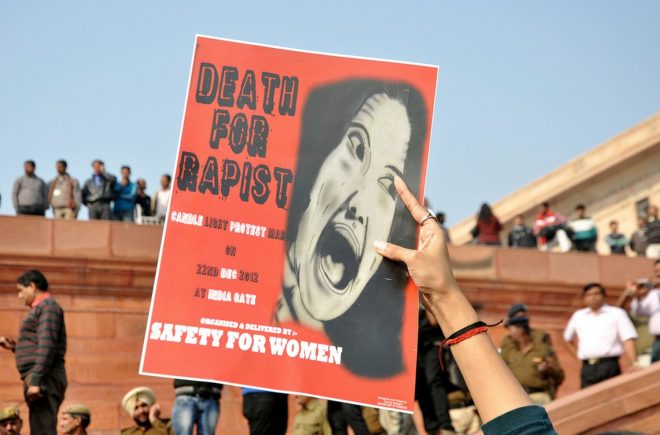 When the banner is unfurled, all the reasons go inside the trumpet. — Ukrainian proverb

As the Supreme Court of India upheld the death sentence awarded to the four men convicted of the gang rape and murder of Nirbhaya in December 2012, the audience in the courtroom broke into applause. Multitudes of Indians on social media rejoiced at the news and many of them, especially the cowardly faceless ones, went on a rampage – trolling, abusing and threatening with violence anyone who had a different view or opposed the death penalty. Law minister Ravi Shankar Prasad, sounding delirious, said the verdict was a victory of the law of the country after the case had been “dealt with the maturity of democracy”. Top politicians from across the political spectrum joined him in cheering the verdict.

The way this case started and played out – right up to the Supreme Court’s May 6 verdict upholding the death sentence to Akshay Thakur, Mukesh Singh, Pawan Gupta, and Vinay Sharma – should be a matter of grave concern for us as a society.

It is difficult for a citizen of the Republic of India to criticize a court verdict. Criticism can be seen as “contempt of court” – under a British-era law that was designed to oppress “the natives of the colonies”. (Britain has done away with the law.) However, Article 19 of our Constitution guarantees us the freedom of speech, exercising which, I wish to say that the verdict sending the four convicts to the gallows was substandard for a true democracy. Also, wasn’t this what the mob outside the courtroom – across the country – had been lusting for?

When the news broke out that a young woman – gang-raped, impaled, and thrown out of a bus on the road to die – had been admitted to hospital with grievous injuries, Delhi’s public came out into the streets demanding justice for Nirbhaya (later referred to in the media by her original name, Jyoti Singh) and punishment for her tormentors. It was a spontaneous reaction. Soon the media took over, the coverage getting louder by the day. What followed was an unprecedented outrage that spread across the country. However, the protests were particularly violent in the capital – a policeman, Subhash Tomar, 47, died after sustaining injuries in the clashes that took place. Meanwhile, Nirbhaya was flown to Singapore for treatment. She died of her injuries a few days later, on December 29. By this time, all the suspects were in custody. The mob became more mobbish. It wanted nothing short of the blood of the suspects spilled on the roads of Delhi. It was like a primeval tribe baying for violent retribution.

The behaviour of such a mob is best described by the Nobel laureate Austrian ethologist Konrad Zacharias Lorenz in his 1963 book “On Aggression”. He writes that such individuals experience a “heiliger schauer” (German for “holy shiver”) just before lynching a man. He describes it as a “tingling of the spine” prior to performing a “heroic act” in “defence” of their communities. The feeling is like the prehuman reflex that raises hair on an animal’s back as it zeroes in for the kill. He writes [pdf]: “A shiver runs down the back and along the outside of both arms. All obstacles become unimportant … instinctive inhibitions against hurting or killing disappear … Men enjoy the feeling of absolute righteousness even as they commit atrocities.” (Chapter 13, pages 260–265)

Murderous mobs – on roads, on TV cameras, and on social media – showed this behaviour at every step of the process, from the arrest of the suspects to the upholding of the trial court verdict by the top court. They didn’t even spare the minor who was convicted in the case by the Juvenile Justice Board. They continue to bay for his blood even today when he has served his time at a juvenile correctional centre and now reportedly works at an eatery in south India. Showing complete disregard for the law of the land, they exposed his name, demonized him, and published his details that could lead to his identification and even lynching.

Delhi Police had reportedly made a watertight case that led to the death sentence to the four convicts. A fifth suspect, Ram Singh, was found dead under mysterious circumstances in Tihar jail. Strong suspicion persists that he was murdered in his cell. The others were subjected to brutal treatment inside the prison. One of the four convicts, Vinay Sharma, was attacked and his bones broken. He later tried to commit suicide. Ram Singh’s brother and then co-accused – and now a convict – Mukesh Singh was reportedly made to eat human excreta when he was lodged in jail. Both the brothers reportedly told their parents they were sodomized.

The above stories of brutal treatment of the accused, and later convicts, drew cheers from the delirious mob on social media and the comments sections of the online news reports. It was the same behaviour as described by Lorenz.

There is little doubt that all the six, including the juvenile, were involved in the crime. The adult convicts deserve harsh punishment for their ghastly crime. However, doubts remain whether the entire body of evidence – and arguments – given in defence of the convicts received the attention it should have and whether the mob’s demand for blood, magnified a zillion times by the media, had no bearing on the verdict. The amicus curiae in this case, senior advocate Sanjay Hegde, seems to have a case against the verdict. It is worth a look.

After the top court’s verdict, defence lawyer AP Singh said, “Justice was not done.” He vowed to file a review petition in the court.

There were also reports of startling claims that put a note of interrogation on the trial. Had any of these happened in a western democracy, the case would have been thrown out of court on technical grounds.

There is no room for death penalty in a civilized society. In January 2011, this site argued against the death penalty in the article “Time to do away with death penalty”. I won’t repeat the arguments. Suffice it to say that to come out of the primeval mindset, as described by Konrad Lorenz, individual members of our society need to revisit their conscience. If an individual’s conscience justifies the killing of a fellow human being and derives pleasure from it, there exists a serious problem that must be gotten rid of.

The problem is emblematic of the same mindset that justifies the lynching of a dairy farmer, a child, or a helpless villager among others by vigilante mobs on mere suspicion of cow smuggling or cow-meat eating. Arguments are given that merely teaching young children to respect women will result in fewer rapists in society. This is a sham. A society which tells its children that the killing of a fellow human being is justified for such and such reason will spawn sadistic and violent criminals – as juveniles or adults – who will have their own justifications for their actions.

Unless we stop justifying murders legally, we can’t bring down the number of violent crimes in our society. The right thing, which will bring down the number of violent crimes, will be to teach our children that it is immoral and criminal to take the life of a fellow human being. No crime can justify the killing of a human being just as no dress a woman wears can justify her rape.

The Ravi Shankar Prasads of the world must know that the Supreme Court verdict shows neither the maturity of our democracy nor the victory of the law of the country. On the contrary, it presents to us the frightful reality that we are yet to evolve to the level of the mature societies that have abolished the death penalty. Of the 196 countries in the world, we are among the 57 that retain the death penalty. It is not an enviable club. Because of our refusal to abolish the death penalty, our laws have failed to curb violent crimes like Nirbhaya’s gang rape and murder.

One must understand, there can’t be a good murder and a bad murder – the so-called good one taking place inside the confines of a prison where a convict is bound, dragged from his cell to the gallows, and hanged by the neck till death.

When the review petition comes before the Supreme Court, it will have a chance to rise and rectify itself and hand out just punishment to the convicts.

However, if this sentence is executed, there would be four grisly custodial murders of the four convicts inside Tihar jail that will match their gruesome crime inside a dark bus on a cold December night.