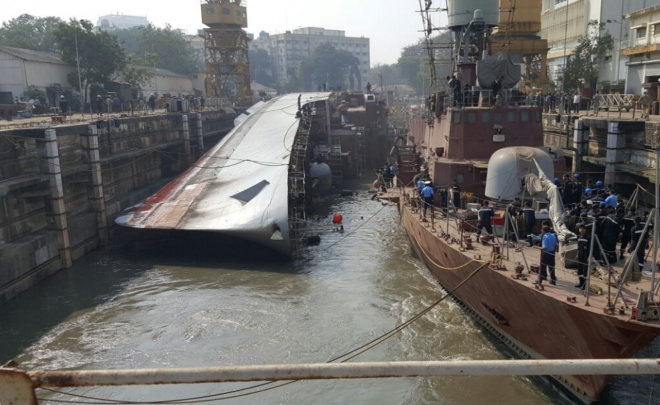 The toppling of INS Betwa, a Brahmaputra-class guided-missile frigate, puts a huge note of interrogation on the Indian Navy — a force on whose competency rests not only India’s maritime security, but aspirations to become a global power.

The December 4 accident, which took place at the naval dockyard in Mumbai while undocking after undergoing midlife refit, killed two sailors and injured at least 14 others. In the process, the accident has dealt a serious blow to the Indian defence forces, particularly the Navy in a major way. The financial damage aside, which can run into hundreds of crores of rupees, it is now estimated that it will take at least two years to salvage the warship, if it can be salvaged at all.

This is a critical blow to India as a warship doesn’t come cheap, and it doesn’t come easy. It takes years to build and commission a warship in India as the country lacks a robust shipbuilding infrastructure as well as adequate technical knowhow. Also, it still depends heavily on foreign countries for critical components and weaponry needed in a modern warship.

Apart from this, it takes almost the same time to order one from a foreign country because of India’s notorious bureaucratic hurdles, and induct it in the Navy after it has been finally built abroad.

Let us forget for the moment the huge strategic setback and financial loss India has suffered because of this accident and take a fleeting look at the Navy’s record of accidents involving its warships.

While shipyard accidents, often resulting in casualties, are not uncommon in navies across the world, the Navy cannot escape giving the same excuse. From 2010 alone, the Navy saw 20 big and small warship accidents at least, including the INS Sindhurakshak and INS Sindhuratna submarine disasters, which killed dozens of sailors and officers. Even INS Betwa had an incident prior to this, in 2014.

It is ironical that most of these accidents, including this latest one, happened in the Western Fleet — the so-called “sword arm” of the Indian Navy.

The INS Sindhuratna accident prompted the-then Navy chief Admiral DK Joshi to resign, the first service chief to do so in India. However, this has had little or no effect on the attitude of the government in general and the Navy in particular.

It was astonishing to hear our defence minister, Manohar Parrikar, say “none can be blamed” for the INS Sindhurakshak accident “because all on board the submarine had died”. On the other hand, the Navy, by theory of deduction, acknowledged that “mishandling of ammunition” could be the reason behind the disaster.

If you thought this was a show of inexcusable incompetency at multiple levels, think again.

Commenting on the INS Betwa accident, Parrikar said it could be a result of a “miscalculation of balance”.

Well, Parrikar is an honest man. He said what he truly thought of it. And, what more could he have said?

However, even a kindergarten dropout can take a correct guess on what might have caused the warship to fall crashing on its broadside. The “whats” in such cases are important, but hardly as important as the “whys”.

This is not the first time a warship had been docked and its components removed for repairs in India or, for that matter, in that particular Mumbai dockyard. This is a pretty routine thing, especially for ships docked for extensive repair and maintenance work.

How can there be a “miscalculation” like this that shows the handlers of INS Betwa as a bunch of clueless novices?

INS Betwa lying on side after she collapsed down due to a mishap while leaving the port after a refit. #INSBetwa @indiannavy #navalcraft pic.twitter.com/piVGbUwlv4

Looking at the images of the warship lying helplessly on its side in the dockyard muck, a chuckle comes out before concern sets in. At least, for the first time. This is enough to drive in the point here.

Yes, there could be civilian dock workers and engineers involved in the undocking of the warship. There could be a systemic rot in the work culture of the dockyard, but it is the Navy which must absorb the total responsibility for this shameful display of complete incompetence for obvious reasons. Everything has happened under the Navy’s direct watch.

No one, but only the Navy is responsible for its warships. Not that they are doing it at this moment, but it cannot pass the buck to anyone even in the future unless they start outsourcing such work to independent third parties.

Yes, heads must roll for this disaster that shouldn’t have taken place in the first place at all. A lot of heads must roll. But a lot more must be done as well.

Our armed forces cannot run being at the mercy of the Almighty. Given our geopolitical aspirations and strategic placement on the planet, the Navy today is expected to take the most important role among the three services. All ranks, right from the fleet commanders to the sailors, must know that discipline goes much, much beyond the march pasts.

The Navy chief must immediately show utmost urgency to ensure the highest degree of competency at every level of the force. The “chalta hai” attitude in the force, about which an alarmed and concerned observer wrote in 2015, must be killed. Right now.

On his part, the minister would do well if he earnestly makes an attempt to seek the answers of the “whys” in this case so that he can take the required measures to prevent such accidents in the future.

As Indians, it is our right to have all the reasons to be proud of our Navy, to be proud of the warships we have. We don’t want to see the force pockmarked with disgraceful scandals and plagued with shameful incompetency.

The INS Betwa accident is one accident too many for the Navy. It’s high time the organization redeems itself as a disciplined and competent military force.

Unless that happens, it would be very difficult to have confidence in the Indian Navy as a serious fighting force capable of even defending the motherland, let alone furthering her interests.