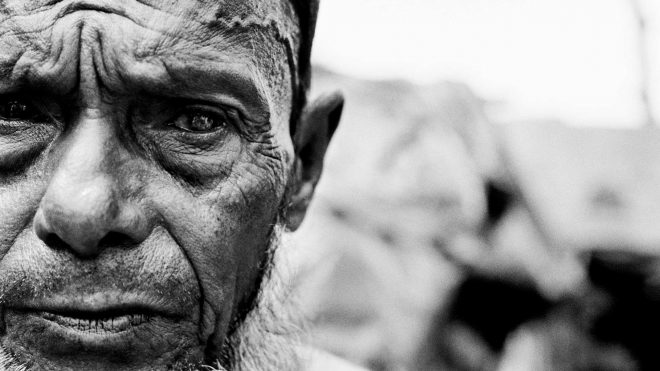 Today, the wretched Rohingya Muslims of Myanmar are again facing a genocidal campaign against them by the Burmese government. The recent wave of atrocities against them started with the killing of nine Burmese policemen in Rakhine State by alleged Rohingya “insurgent terrorists” on October 9, 2016.

Since then, tens of thousands of Burmese troops have poured into the restive province and embarked upon an indiscriminate campaign of rape, murder and ethnic cleansing of Rohingya villagers, without showing mercy to even women, children and the old.

Tens of thousands of desperate Rohingyas, fleeing the Burmese military and murderous mobs of local Rakhine Buddhists, have flocked to the border areas triggering a serious refugee crisis. Neighbouring countries, especially Bangladesh, are facing a huge influx of the displaced Rohingyas.

This is not new, though. The Rohingyas have from time to time sought refuge in neighbouring countries whenever the Rakhine Buddhist population and/or the military has gone on a killing spree against them.

These refugees are often dealt with without compassion or sympathy by the countries they try to enter by land or water. They are, in fact, treated brutally, denied access to food, medicines and shelter, and are prosecuted without being given any access to lawyers. In 2009, reports emerged that the Thai authorities tied the limbs of some Rohingya refugees trying to enter the country and set them adrift in boats in the middle of the sea. Many of the cases of maltreatment of Rohingya refugees amount to crimes against humanity. Today, even Bangladesh has sealed its borders with Myanmar to prevent the fleeing Rohingyas from coming in.

In 2015, the UN High Commissioner for Refugees (UNHCR) estimated that over 25,000 Rohingya refugees fell prey to human traffickers; many of them died at the hands of the traffickers. Mass graves of Rohingyas were found near Thailand’s border with Malaysia.

Who are the Rohingya and why are they in such a miserable state?

Going by the discourse of those on social media who are “concerned” about the “possibility of Rohingya terror strikes”, it seems that an overwhelming majority of outsiders – especially Indians – are ignorant of the issue. Except extremist Burmese Buddhists and some diabolical hatemongers who incessantly spew venom against the Rohingyas online, these “concerned” people are either brainwashed Islamophobes or know almost nothing about the Rohingyas. This is evident from a simple search on Facebook or Twitter.

With the hope that at least some of them will start viewing the Rohingyas differently, let’s have a brief look at the history of these persecuted people and the issues they are facing today.

There are around 1.1 million Rohingyas in Myanmar today. Though they are in a majority in the northern Rakhine State, they are an ethnic minority in the country. The UN refers to them as one of the most persecuted minorities in the world, and probably among the most forgotten ones.

Although Muslims are known to have been living in Rakhine State (earlier known as Arakan) for centuries, there is no clarity about their exact numbers before the British rule. During the British rule, many Muslims were settled from Bengal to work in the Arakan province, mostly as farmhands.

After Myanmar gained independence in 1948, discrimination and hostilities against the Rohingyas started growing. Without going into the premodern history of the persecution of Muslims in Myanmar, the root of current hostility towards the Rohingyas can be traced to the 1942 Arakan massacres — in which British-armed Rohingya Muslims and Rakhine Buddhists killed each other in large numbers — and the Rohingya insurgency of the 1940s. Since then, there have been periods of systematic violent campaigns against the Rohingyas by the Burmese military and/or Rakhine Buddhists.

In 1982, taking the excuse of the ambiguity on who the native and who the migrant Muslims are, the government of General Ne Win enacted the Burmese nationality law [PDF], which stripped almost all the Rohingyas of their citizenship and rendered them stateless. The Rohingyas are also denied the right to use the term “Rohingya” (from the word “Rooinga”) to describe themselves because that would give them some kind of historical legitimacy as indigenous Burmese people. They are simply classified as “illegal Bengali migrants”.

It must be mentioned here that the Rohingyas speak a dialect that is similar to the Bengali language’s Chittagonian dialect, spoken in Bangladesh’s Chittagong Hills and the areas bordering Bangladesh and Myanmar. But linguistic similarity prevails in all border areas everywhere.

The rights of Myanmar’s Rohingyas are severely restricted today. Stripped of citizenship, they have no right to seek justice against discrimination before any national body or authority. Apart from that, the Myanmar government has curtailed their fundamental human rights such as right to movement; right to practise their faith; and access to healthcare, education and employment opportunities. Even their right to marry and bear children is severely restricted by law.

The misery of the Rohingya refugees is compounded by the fact that none of Myanmar’s neighbours — India, Bangladesh, Thailand, Laos, and China — are signatories to the 1951 UN Refugee Convention or its 1967 protocol. However, all these countries, including Myanmar itself, are signatories to the UN’s Universal Declaration of Human Rights.

The 1948 declaration, made in Paris, represents the first global expression of the rights to which all human beings are inherently entitled. The document expresses the rights of not only individuals but also groups of people classified by race, ethnicity or religious beliefs.

Since the declaration, the world community, often through the UN, intervened to either prevent or stop persecution and atrocities against people across the world. It succeeded in many cases, but failed in some as well. At times when the UN failed, individual countries took the responsibility on themselves and succeeded. The biggest example of this is India, which not only stopped the genocide of Bengalis in East Pakistan, but helped them create a country of their own — Bangladesh.

India did this by arming and training the Bengali insurgents, Mukti Bahini, before directly entering a war with Pakistan in December 1971, which finally saw the liberation of Bangladesh from the oppressive Pakistani regime.

During the Burmese military’s first large-scale pogrom against the Rohingyas in the infamous “Operation Dragon King” in 1978, over 200,000 Rohingya refugees entered Bangladesh. The-then leader of Bangladesh, Ziaur Rahman, took a strong stand against the Burmese government and encouraged the Rohingya refugees to take up arms against the Burmese junta. The threat of a foreign-backed insurgency coupled with strong diplomacy [PDF] involving the UN, the Muslim League, India and Saudi Arabia forced Myanmar to sign a bilateral agreement with Bangladesh and take back the refugees.

However, a military intervention against Myanmar is out of the question today as such a move will be against the strategic and domestic interests of the countries surrounding it, including India. Not only does a military intervention risk scuttling Myanmar’s nascent democracy, but supporting a Rohingya armed rebellion runs the risk of feeding the devil of Wahhabi extremism and Islamic terrorism lurking in the region.

Already, India, Bangladesh and Thailand are battling Islamic terrorism. The last thing they would want is a Muslim militia that could fall prey to Wahhabi brainwashing. There are some ominous signs of radicalization already happening among Rohingya Muslims, although the jury is still out on whether it is towards global Islamic jihad or a manifestation of Rohingya anger limited against the Burmese government. However, there is no denying the fact that the Burmese government has conditioned the Rohingyas for radicalization through relentless persecution.

Therefore, diplomacy is the only hope to resolve the Rohingya crisis.

A robust diplomatic approach by UN member-states, especially the regional stakeholders, to force the Burmese government into accepting the Rohingyas as their own people is a must.

Recently, Malaysia, which doesn’t share borders with Myanmar but is affected by the Rohingya refugee crisis, has strongly called upon the world to pay attention to the “genocide” of the Rohingyas. Indonesia, another non-bordering but affected country, has decided to hold talks with Bangladesh to discuss the Rohingya crisis.

But this is not even a start.

Although India has been accepting Rohingya refugees and settling them in various parts of the country, it is hardly enough. By virtue of being the biggest and most capable democracy in the area, India must take the lead in this initiative along with Bangladesh and other regional countries affected by the crisis.

Myanmar’s re-adoption of democracy after 50 years or its “help” in combating terrorism in India’s northeast shouldn’t weaken New Delhi’s voice against Naypyidaw’s atrocities against the Rohingya people.

New Delhi must take the lead in persuading the international community ― especially the US and the EU ― to tell Aung San Suu Kyi, the de facto leader of Myanmar, that avoiding the issue or laughing off the Rohingya situation as “fabrication”, is not going to help her cause, the popularity of an anti-Rohingya stance in Burmese politics notwithstanding.

She must be made to understand that her legacy can’t afford to belittle the continuous and widespread international support she received during her struggle for democracy against the Burmese junta, for which she even received the Nobel peace prize. Her historic election win in 2015 is something that should give hope to all the Burmese people, including the Rohingyas.

There are some signs of international pressure working on her, but a stronger pressure needs to be applied and sustained.

On the other hand, the Burmese military must be told that the gains the country made internationally by allowing democracy after five decades stand to diminish rapidly if the Rohingya persecution is not stopped and a permanent solution acceptable to the Rohingyas is not adopted. (A full-blown Rohingya insurgency can complicate the military’s war against other insurgent groups, like those operating in Kachin and Shan.)

Until that happens, the countries in the region must urgently work towards building a framework for humane treatment of refugees and implement it earnestly. We must also understand that apart from our duty to show kindness to the Rohingya refugees, the need to make sure that the Rohingyas get the recognition and rights due to them is paramount. There is always the risk of the crisis mutating into something much bigger, something very sinister for all of us.

And time is running out.