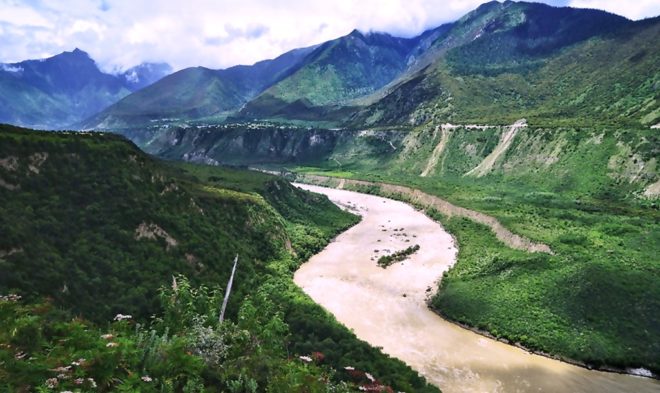 China’s expansionism is well known. Today it has land and maritime territorial disputes with as many as 23 countries, although it shares land boundaries with only 14. At times, it grabs land through brazen invasion and annexation, as in the case of Xinjiang to its northwest and Tibet to its south. At other times, it resorts to salami-slicing, as in the Himalayas with India. The world seems to have largely forgotten the annexation of Xinjiang and given up hope for a free Tibet.

Until the Doklam stand-off, the world barely took notice of China’s land-grabbing manoeuvres in the Himalayas. What was noticed was its territorial grab of the South China Sea, where it has built artificial islands and militarized them. The world vociferously opposes it and sometimes indulges in symbolic acts of defiance.

However, China’s most ambitious and far-reaching manoeuvre to force Asia on its knees and become its overlord – the gradual control and manipulation of the continent’s fresh water – still appears to be going on virtually unnoticed.

It began with the “peaceful takeover” of Xinjiang by the People’s Liberation Army – the militia of Mao Zedong’s Chinese Communist Party – from the Republic of China’s coalition government comprising the Chinese Nationalist Party and representatives of the-then Second East Turkestan Republic during the waning days of the Chinese Civil War, in 1949. This gave China access to two big transboundary freshwater sources – the Ili and Irtysh rivers, which flow to the thirsty Central Asian region of what is now Kazakhstan.

In the following year, 1950, the PLA invaded and annexed Tibet – an independent country with a landmass of 2.5 million square kilometres. (Beijing set up the Tibet Autonomous Region for administrative purposes in 1965, which is much smaller than the original size of Tibet.)

The annexation of Tibet, which is also called the “Water Tower of Asia”, gave China control of some of the most important freshwater sources in Asia – mighty rivers, like the Brahmaputra, Indus, Mekong, Salween and Yangtze; their arterial tributaries; and major lakes from which some of these rivers and tributaries originate. More than 1.5 billion people downstream depend upon the rivers, many of which flow into other countries. China’s policies on Tibetan rivers affect nine countries [pdf] to its south – Pakistan, India, Nepal, Bangladesh, Myanmar, Laos, Thailand, Cambodia and Vietnam.

During China’s so-called “peaceful rise” from the late 1970s through the 1990s, the communist country adopted a unique model of market economy, in which it allowed and helped private players to build industries and infrastructure. The pace of development was such that China, which was one of the poorest nations on earth, is the world’s second-largest economy today. This required water and lots of it – for power generation and other uses for the rapidly expanding industries, industrial townships and cities.

To meet this colossal requirement of water, it turned to the rivers originating in Tibet.

Today China has 87,000 dams, including some of the biggest and most environment-threatening ones, like the “Three Gorges Dam”. The country accounts for over 20 per cent of the largest dams in the world, and is building more dams than ever before. This has affected tens of millions of people within China itself who continue to suffer the impact of displacement and dislocation. Coupled with damming rivers, China is also diverting their waters.

A recent study revealed that China has, until now, developed a total reservoir capacity of 794 cubic kilometres, which is by far the largest on earth. Because of this, a total of 26,870 square kilometres of  water-surface area has appeared. However, 350 lakes with more than 1 square kilometre of surface area have disappeared, amounting to the disappearance of a total of 18,151 square kilometres of water-surface area. One of the most remarkable achievements of China’s damming spree is that 20 per cent of the accessed river basins in its north and northeast can store more water than the entire annual flow of the rivers.

At this moment, China is working on the “South-North Water Transfer Project”, which seeks to channel 45 billion cubic metres of fresh water annually from the Yangtze river and its tributaries in the country’s south to the arid and more industrialized north. Already, China has spent nearly $80 billion on the project, making it one of the most expensive engineering projects on earth. However, the most contentious part of the project, which has probably started now, is the western route called the “Big Western Line”.

In addition to diverting water from the headwaters of the Yangtze to the headwaters of the Yellow river by building huge dams and long tunnels to cross the Qinghai-Tibetan and Western Yunnan plateaus, China aims to divert about 200 billion cubic metres of water annually from the upstream sections of six rivers in its southwest. Three of these rivers – the Brahmaputra, Mekong and Salween – flow into other countries. This is bound to affect India, Bangladesh, Cambodia, Laos, Thailand, Vietnam and Myanmar.

Apart from this, China’s reckless industrialization and mining activities have polluted most of the rivers in its territory, including the headwaters of transboundary rivers. This has become a grave health hazard for not only the Chinese but also the people of downstream countries.

China lies at the centre of an array of disputes arising from the abuse and exploitation of transboundary rivers by it. As discussed in the previous article, Water games – 1: Rising thirst in Asia, there are three broad categories of disputes – over the Mekong (involving Cambodia, Laos, Thailand and Vietnam), over the Brahmaputra (involving India), and over the Ili and Irtysh (involving Kazakhstan). The number of affected counties is expected to grow: Bangladesh and Myanmar will start feeling the heat soon. Besides, the number of rivers in such disputes is bound to increase when transboundary tributaries are disturbed or abused.

China is not just damming, diverting and polluting the transboundary rivers in the territories it controls, it is also changing their courses and reshaping them for its ambitions Silk Road push. In 2017, alarmed Thai officials protested against China’s plan to widen and deepen parts of the Mekong by blasting sections of the river to enable the navigation of heavy cargo ships for its trade. They said the move would sound the death knell of the Mekong, which China has already dammed heavily.

Problems the downstream countries face while dealing with China are many. To begin with, China doesn’t have a water-sharing agreement with any country or group of countries. It refuses to become a full member of the Mekong River Commission (MRC) because that would put it under some kind of legal obligation. China doesn’t believe in any such treaty and asserts absolute sovereignty over the water on the territories it controls and claims the right to use it in whatever manner it deems fit. In line with its hegemonic policy, it has rejected the UN Convention on Non-Navigable Use of International Watercourses [pdf].

Apart from this, China, which has border disputes with almost all its neighbours, seeks to use water as a weapon. Although there is an agreement between India and China to share hydrological data, which would help India predict and manage the floods caused by the water coming from Chinese-controlled territory to India, China withheld this data after the military stand-off between the two countries in Doklam last year. After the unprecedented flash floods in India’s northeast in late 2017, Indian officials blamed China and called its refusal “mischief”. For its part, China gave an unconvincing reason for not sharing the data with India.

In 2016, Narendra Modi, India’s prime minister, warned Pakistan that New Delhi might modify its unfairly generous water-sharing pact – Indus Water Treaty – with Islamabad if it continued to aid and abet terrorist strikes in India. Pakistani commentators reminded India that Pakistan’s all-weather friend, China, could take countermeasures against India with the Brahmaputra. China has been using Pakistan as a strategic asset to keep India busy on its western front so that New Delhi remains stretched and less focused on Beijing’s military and land-grabbing activities along the line of actual control (LAC) in the north and northeast.

As China cannot be forced to enter into water-sharing treaties, the best bet for smaller countries is to partner other countries and mount a joint opposition to it. The four MRC countries have failed to speak in one voice against China so far. Together, they have a significant trade leverage with China, although Beijing is rapidly chipping away that leverage with “debt-trap diplomacy”. Similarly, Kazakhstan, through which Xi Jinping’s ambitious OBOR project runs, can partner Russia as the latter’s Ob river is affected by Chinese diversion and pollution of the Irtysh. Russia also has major issues with China over the pollution of the Amur river from the Chinese side of the border. India has trade and other leverages against China that it can use should Chinese activities threaten the Brahmaputra and/or other rivers originating in territories under Chinese control.

Tension has been building up across Asia due to China’s intransigence over water. Already, there are warnings that hostilities over water may rapidly get mixed up with other disputes and escalate into armed conflicts in the continent.

To counter China and bring it to the table for effective negotiations on river-water sharing, the affected countries will have to display a strong political will. Time is running out. They must act now.