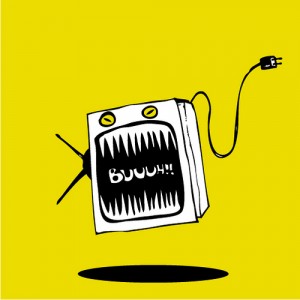 What I am going to discuss is not new. There is a continuing debate and discussion going on in India about the scam that is running in the name of disseminating information and breaking news by the seemingly endless list of television news channels in the country. Ever since Aaj Tak broke into the private TV news channel scene all rules of the old and ethical journalism have changed

With the advent of private news channels post liberalization, we hoped that we can at least see unbiased news reports, analysis and daring journalism; channels that do not follow the government-of-the-day’s political correctness, channels that cannot be bullied by those in power. We hoped to see more of the likes of Brahma Chellaney, who was the face of fearless journalism during the Operation Blue Star. Maybe, for a brief period that happened till the late 90s with NDTV leading the way.

However, that wasn’t what we – stupid Indians – had in store for. Today, we are being dished day in and day with unimaginable amounts of scum-rotten ‘news and analysis’ content, meaningless discussions and debates that are usually full of rhetoric and boring verbosity.

With the exception of perhaps one mainstream TV news channel (that I may name some day in future if it continues to be the way it is), all channels thrive on plain yellow journalism to score over the other.  And, we deserve every bit of the shit we are being dished out by them, simply because we hog every bit of the shit called news content shamelessly.

This post here is not about or on how Hindi ‘newstertainment’ channels like Aaj Tak or India TV or IBN7 dish content to compete with each other, because I don’t watch them no more. The post is on those channels whose editors were once the face of Indian journalism, inspiring many a youth to take up TV journalism in the last decade or so.

There are these self-proclaimed ‘faces of fearless journalism’ and ‘journalist-driven’ channel founders who have not only shamed, but raped the very fundamentals of ethical journalism in India causing it the indignity that I am afraid, might take decades to wipe off if not a rich (and not necessarily a bald) guy with a truckload of cash and conscience comes seeking motivated young people to start a fearless, journalist-driven, unbiased and ethical TV news channel today.

Without delving into the past to discuss which well known TV journalist’s actions compromised how many soldiers’ security and plans fighting terrorists savaging a city,  or whose unashamedly biased ‘reportage’ fanned communal tensions let’s look into what happened in the last few weeks.

The channels suddenly found a whipping boy in the Shiv Sena (Sena). Of course, like most sane, proud and even nationalistic Indians, I think the Sena and its splinter party the Maharashtra Navnirman Sena (MNS) are parties of buffoons, by buffoons and for buffoons. They have been able to flog themselves with embarrassing regularity making them the butt of jokes throughout the country including Maharashtra itself.

However, I would like to point out to the fact that the editors of these channels have made themselves look like bigger buffoons by the way they covered the Sena vs. Rest of India fiasco. First they tried to raise the issue of the Sena howl against Sachin, then Ambani etc. However, since they didn’t give much importance to the channels and ignored them, the editors of the channels were left high and dry. They wanted the sensation that they couldn’t get from ‘raising’ such ‘profound’ issues of ‘national importance’.

Then they finally got it!

Shah Rukh Khan (SRK) is one of those beyond the curve marketers of his own brand in general and films in particular. Many other Bollywood actors would do well in business emulating him. He had his upcoming movie – My Name is Khan (MNIK) to promote. What better way to promote the movie in India than create a controversy around it. Yes, the promos are on, but nothing beats prime time news publicity especially when you don’t have to pay for it (the programme sponsors would foot the bill).

So he did what best could be done; he ‘hurt’ the ultra-sensitive gonad region of the Sena by placing the weight of the country over it. As expected, the bellicose Sena buffoons wasted no time to put on their baboon gears and go on to threaten the actor and vandalize the theatres that were to screen the film on its release.

Suddenly, protecting a Muslim superstar and his right to business (read business interests) from the communal baboons of the Sena becomes the cause that the ‘secular’ news channels they had to ‘fight’ for without second thoughts. They came in herds and joined hands in their crusade against communal-cum-regionalist forces dividing the nation.

The ruling ‘secular’ coalition government of Maharashtra also joined in to fight their political opponents. The channels devoted 1000s of hours collectively to SRK’s cause vilifying the Sena as monsters of modern India, the evil that India can be killed by…

For the last ten days or so, MNIK ran successfully even before its release in the news TV channels, and continues to run so till today.

And, everyone except the Sena was a winner in the end.

The channels raked in more than average ad money because of high TRP the SRK-Sena coverage got them, a seemingly forgetful movie got houseful openings across the country and the ruling coalition in Maharashtra successfully scored a brownie point over its political opponent.

What more can one ask for?

Two questions though for these fearless faces of journalism and journalist-driven channels.

1. Where were you with your secular/national cause when Kamal R. Khan’s (KRK) Deshdrohi was banned by the state government for 60 days under the Bombay Cinema Regulation Act?

Well, of course I should have known the answer. SRK is a superstar (who sells) whereas KRK was a rookie (hence, an unsafe bet). But then, you might have a different answer.

2. If regionalism is such a bad thing, if Mumbai is for all Indians, where is your voice against Article 370 in Kashmir? After all, following the Hindu exodus from the Valley under the threat of guns from the Islamic terrorist, there was no Kashmiriyat to protect under the temporary provisions of Article 370. Isn’t Srinagar too for all Indians then?

Ah! Maybe Kashmir is an international issue for you.

If the TV news channels really wanted to snub the Sena, they could have reported the threats made to the actor, pointed out what they did in the past and what they are doing now (like bringing in an Western icon Michael Jackson to perform in Mumbai in the past and now targeting ‘Western culture’ by smashing shops selling Valentine’s Day cards and cakes); and moved ahead with it. Instead, the way they carried the diatribe for days was despicable, dishonourable and vulgar to say the least.

Journalism, my friends, is not just a word. Break news, show facts, analyze, but never try to put words in your guest’s or interviewee’s mouth, and don’t ever try to create opinions. And, yes, don’t shout too much while anchoring a programme. Keep your voice low, we can still hear you.

Present news and facts as it is and let the public form their opinion. It is not your job. In fact, it is a cardinal sin for a journalist to show bias and/or try to form opinions in public mind.